Bon chance and buena suerte to researchers in France and Chile as they embark upon a joint exploration of The Great Taboo. After agreeing to collaborate in 2013, Chile’s government-sponsored Committee for the Study of Anomalous Aerial Phenomena (CEFAA) and a French NGO, the SIGMA2 Technical Commission, announced their “first working meeting” in Paris on Oct. 28-29. The following day, CEFAA chief Ricardo Bermudez and GEIPAN's Xavier Passot, head of the official French research group, convened to offer their governments' respective stamps of approval.

First, a few definitions. We know about CEFAA, they’ve been around since 1997 by order of Chile’s civil aviation department. And we know about GEIPAN, the French agency that, as a branch of its space program, has been collecting UFO data under various acronyms and incarnations since 1977. GEIPAN assigns an A through D rating system to its UFO reports, with D being the truly puzzling cases without explanation. Some 20 percent of its 2,200 cases on file fall into the D file.

This part is news to De Void: SIGMA2 is a branch of 3AF, a private-sector technical society, the rough equivalent of the American Institute of Aeronautics and Astronautics here in the States. According to SIGMA2 Commission President Luc Dini, “We work with GEIPAN to look at ‘D’ cases ... where GEIPAN has no special expertise to look further for explanation and causes. Since our role is not official, without direct involvement into the field investigation, we are focused on the analysis of physics and measurements ... after the preliminary investigation.”

According to Dini, Chile has concluded UFOs, or UAP, or PAN in the preferred local parlace, pose a “potential aviation risk,” but CEFAA has no analytical component like SIGMA2. And that’s significant because, says Dini, CEFAA “wants to go beyond the investigation and attempt to scientifically explain the causes” of the phenomenon. If only they were a bit more ambitious ... At any rate, Dini says SIGMA2 is not only eager to move forward, but that this “axis of cooperation” has “confirmed its intention to develop a network of scientific and technical expertise, in France, in Europe and outside Europe, to conduct physical case studies and discuss technical analysis.”

Clearly, one of those partners will be American, the nonprofit National Aviation Reporting Center on Anomalous Phenomena. For 15 years, NARCAP has been assessing The Great Taboo’s potential for catastrophic air corridor encounters, despite being underfunded and underpublicized. Imagine what NARCAP could do with even a modest federal grant of, ohh, say, $307,524. That’s how much the National Science Foundation and the Office of Naval Research are spending on their so-called “Sea Monkey study,” which concludes in February. The goal is to see if brine shrimp can be trained to swim with enough synchronization to affect a healthier circulation of ocean currents.

Anyhow, life goes on without Uncle Sam, and as Jose Lay confirms in an email to De Void, a lot of credit for what’s happening now goes to the foundation laid by the “Symposium on Official & Scientific Investigations of UAP (UFOs)” in North Carolina last year. An invited speaker and CEFAA official, Lay met with GEIPAN's Passot during the two-day event, and “we exchanged information and agreed in principle to start formal cooperation between our entities.” Then they actually followed up on it. And the rest is history.

"I know from personal experience that the relationship of other governments to this issue is important to members of the U.S. government in terms of considering a new official involvement with this issue," states author Leslie Kean, who played a key role in organizing the conference in Greensboro. "The fact that the two leading agencies in the world - one from Europe and the other from South America - are joining forces is extremely significant, and hopefully this step forward will help encourage our government to take the subject seriously and to join in the growing international effort.

"The U.S. role is important, because once the U.S. is on board - even by simply appointing one staffer to evaluate the validity of U.S. involvement - many other countries will come on board. Even a crack in this now shut door would be enough to radically change the picture. If we can simply assign a government appointee to evaluate the question -- are UFOs worthy of investigation? -- then we have made a giant step forward."

Lay cited Kean and conference financier Kent Senter, who dropped a load on the symposium despite his struggle with cancer, for creating such a rational and productive climate. So yeah, some things do work out. And who knows, maybe they all will, eventually, if you’ve got the patience of a saint. 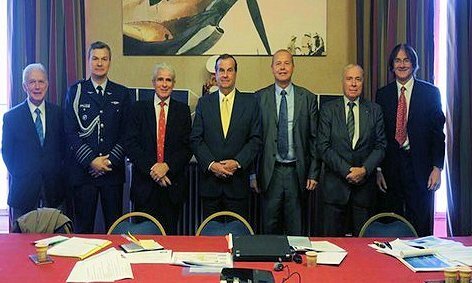 Not afraid to be counted -- Chilean and French officials gather in Paris as a formal agreement to collaborate on UFO studies gets underway/CREDIT: 3AF/SIGMA2